All41 Presents WWE: Clash of the Wilds! 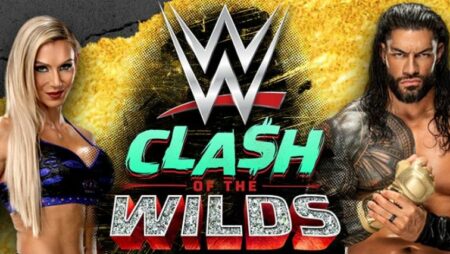 The lowest paying symbols are J, Q, K and A. All pay the same, giving the player 1.25 times the bet for a win containing 5 symbols. The highest paid symbols are the wrestling stars. The backgrounds are green for John Cena, blue for Charlotte Flair, red for Roman Reigns and purple for Bianca Belair. Characters can also appear with gold backgrounds in free spins. Getting a regular win containing 5 symbols from any of the fighters awards 5 times the bet. The Wild symbol substitutes for all symbols and also functions as a scatter symbol, triggering a free spins feature when it accumulates, covering all positions on a reel.

The Wild symbol can appear on all reels and substitutes for all symbols. It also pays on its own, by awarding 2.5 or 10 times the bet for a payline of 4 or 5 symbols. The Wild symbol also works as a scatter, triggering one of 5 free spins features when it lands stacked, covering all 3 positions on a reel. Several free spins features can be activated in the same spin. In this case, they are played one by one in the order of the reel numbers.

Each of the five reels represents one of the characteristics of the free spins. Wrestlers have their own unique feature on the first four reels and filling the fifth reel with wild symbols will trigger the Free Spins Ladder Match. Character free spins features are quite similar, with 6 spins and wild symbols working slightly differently, while Ladder Match is a 3 spins respin feature that can be reset. If multiple reels are full of wild cards in the base game, the free spins features are activated one by one in the order of the reel numbers.

John Cena Wild blocks the free spins
The player receives 6 free spins for getting 3 wilds on the first reel. On each spin, a wild block consisting of 2X2, 3X3 or 4X4 wild symbols can land. The entire block may not be visible. Each golden John Cena symbol adds an additional spin.

Charlotte Flair Wild Multipliers Free Spins
Three jokers on the second reel trigger 6 free spins. At least one wild symbol with a 2X multiplier will land on each spin. The multiplier is applied to all paylines in which the joker participates. Obtaining the golden Charlotte Flair symbol awards an extra spin.

Roman Reigns Pushes Wilds Free Spins
The activation of the free spins on the third reel rewards 6 spins with Roman Reigns. Additional wilds are added to the reels and each time a wild card lands, it moves to fill all positions on the reels. Each appearance of Roman Reigns in gold awards an extra spin.

Free Spins of Bianca Belair Sticky Wilds
Bianca’s free spins are triggered by landing 3 jokers on the fourth reel. Whenever a wild symbol stops, it is locked in its position and remains for the rest of the function. The player receives an extra round for each golden Bianca Belair.

If 3 wild cards are rolled on the fifth reel, the Free Spins Ladder Match is triggered. The player starts with 3 spins which can be reset multiple times. In addition to making victories in the normal way, you are also climbing a ladder of nine steps by collecting the golden versions of the fighters. Each level has its own Jackpot which is paid out at the end of the feature, in addition to the regular winnings.

Level 1 = 1X the bet. Collect 5 gold fighters to advance to the next level.

Level 2 = 5 times the bet. Collect 10 golden fighters to advance to the next level.

Level 3 = 15 times the bet. Collect 15 gold fighters to advance to the next level.

Level 4 = 40 times the bet. Collect 20 gold fighters to advance to the next level.

When a level is completed, the spins are reset to 3. After every 5 gold symbols, except the first level, a booster point is reached, which rewards up to 10 extra gold symbols, 3 extra spins or a safe zone. In a safe zone, the Jackpot will be updated to a number between the current one and the next level.

The function ends when the player runs out of spins or all levels are completed.

If you can’t wait for the free spins to start, we have great news for you. They are all for sale, provided that you do not reside in a jurisdiction where the purchase of bonuses is not allowed. John, Charlotte and Roman’s free spins cost 35 times the bet. You will have to pay 40x your wager for Bianca’s sticky wilds free spins and the Free Spins Ladder Match will set you back 50x your bet.