Another Crazy Controversial Slot For NolimitCity! Space To Remember Gulag! 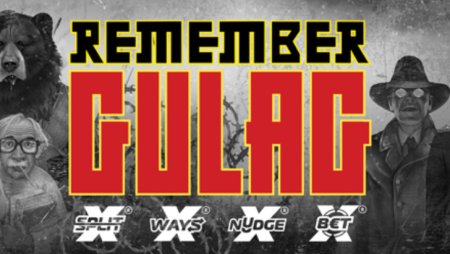 The design of the game is based on the theme of the Soviet Union, where we visit the gulag, one of their prison camps. Against the background of the reels, you can see a gray image with gray crackling elements that recall what happened in older video recordings. The music, which begins with a Russian statement, is then followed by an emotional melody with military drums and sweet notes of a piano.

The lowest paying symbols are Russian inspired suits showing 10, J, Q, K and A. If you roll 6 of the same type of symbol, you pay between 2X and 3X the bet. The highest paying symbols consist of 5 characters starting with a bear greeting Joseph Stalin. If you get 6 symbols of the same type, the bet pays between 4X and 6X. The game’s xWays symbol consists of the iconic hammer and sickle and the game’s wildcard consists of a star with the word WILD on it. The game’s xNudge joker is similar to the regular joker except it has an X on it and the game’s scatter symbol consists of red gold letters. Let’s find out what the features do together.

The game’s wild symbol allows you to get more winning combinations by substituting for other pay symbols. It can land on all reels during spins.

During your spins you can get xWays symbols on reels 1 and 2 in the base game and on reels 5 and 6 in the bonus game. This symbol can range in size from 1X2 to 1X3, with all landed symbols showing the same type of symbol, such as a mystery symbol. It will randomly reveal a paying symbol type and if it is split, its multiplier will be doubled.

xNudge Wild
This can land on reels 3 and 4 within the base and bonus game. When he lands, he will always push to cover the entire reel and for each push that occurs, his win multiplier increases by 1X. When this symbol is split, 1 or more wild cards will be added to the expanded wild symbol xNudge.

xSplit Wild
This can end up on reels 5 and 6 in the base game and reels 1 and 2 in the bonus game. When it lands, all symbols left and right will split, with these symbols doubled. If you divide a symbol more than once, it will appear with a multiplier equal to its number. The xWays symbol multiplier will be doubled for each division it belongs to.

3 scatter symbols = activate Gulag Spins. During the spins you can randomly get 1X, 2X or double the symbol multiplier of the active characters.

4 scatter symbols = Gulag Spins: All Aboard are activated, where all four characters are active during spins.

5 scatter symbols = Gulag Spins: Double Vodka are activated, in which all four characters are active during spins and their payout multipliers will be doubled. During the spins you can randomly get 2X, 4X or double the value of the currently collected payout multiplier.

Before the start of the feature, you will be assigned a random number of free spins and different payout multipliers for the four highest paying symbols. Before the rotation, one of these symbols will become active randomly for the current rotation. When you get 1 scatter symbol, you will receive 1 extra free spin. If you get 3 scatter symbols at the same time, you will upgrade the gulag spins to gulag spins: all aboard, in which all characters will become active with their multipliers during the upcoming spins.

Status of oligarch: achieved
When you successfully activate the Oligarch Status: Achieved screen, you will have the highest potential maximum payout of the game of 30,000 times your bet.