Another Gigablox Made in Yggdrasil: Here is the Sabers and Swords Charge Gigablox! 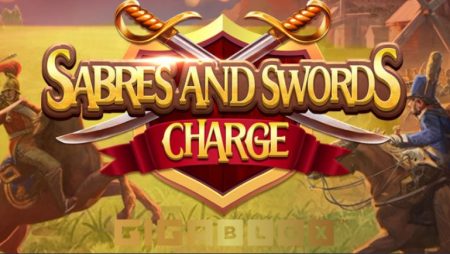 Sabers and Swords Charge Gigablox is a new casino slot that was created through a collaboration between Dreamtech Gaming and Yggdrasil, where we can take part in an epic battle between two mighty armies. The different soldiers are created in a playful theme, where they are made up of toy soldiers and during the spins these symbols can get really big. This is thanks to the game’s Gigablox feature, where symbols ranging in size from 2X2 to 6X6 can land on each spin. A feature we have recently experimented with in Gator Gold Gigablox and Hades Gigablox.

In this great battle that we have ended up in, we have a lot of wonderful features that help us in the pursuit of profit and wealth. Features are Wild Symbol, Gigablox, Engage the Enemy Free Games, Gigablox Multiplier and Bonus Buy.

The game design consists of a theme that shows a battle between soldiers from the 18th century. In the background of the reels, you can see the two different troops fighting intensely with swords, sabers and rifles. You can play this slot on all desktops, notebooks and mobiles. Create a winning combination by landing 3 or more symbols of the same type on adjacent reels starting from the far left.

The Wild symbol helps create more winning combinations by substituting other symbols on the reels. The only symbol it does not replace is the scatter symbol.

The Gigablox feature allows symbols to land in 2X2, 3X3, 4X4, 5X5 and 6X6 sizes. It is active with each new spin made, where different sizes will randomly land on the different reels. Scatter symbols can also land like Gigablox, making it easier to activate the bonus feature, as it requires 5 or more scatters. So by multiplying the size of the Gigablox, you find out the number of symbols it contains. For example, a 4 × 4 Gigablox symbol contains 16 symbols.

39 scatter symbols = Removes all B symbols.

45 scatter symbols = Removes all A symbols.

This multiplier is applied to all adjacent symbols of the same symbol type, with the exception of scatter symbols.

If you want to directly access the Engage the Enemy Free Games feature, you can take advantage of the Bonus Buy feature function, paying x100 the bet will land 5 or more scatters that will give away the bonus