Another Quick Sequel “Megaways”! In November Here is the Big Bass Bonanza Megaways! 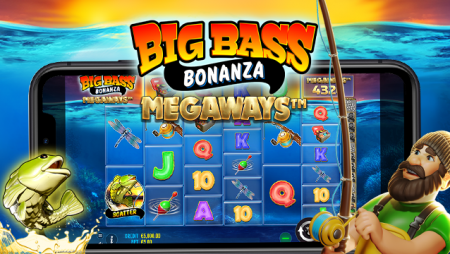 The Big Bass Bonanza Megaways is the latest release scheduled by Pragmatic Play for this year. It will be the third game in a series whose first slot machine came out just a year ago. Fishing-themed, using the ocean as a backdrop, it has the same classic graphics as the rest of the series, but luckily there are other areas where it works well.

In this case you will be playing with 6 reels and you can have up to 46,656 active ways to win, if you get all possible visible symbols. The potential of the slot is quite low, only up to 4,000 times the bet and the volatility is still expected to be high. With an RTP of up to 96.70%, the fairness of the game is not in question, however.

0.20 cents is the minimum bet required to spin the Big Bass Bonanza Megaways. At the highest point, the bet could take up to 100 euros.

One area where it doesn’t seem to work as well is paying out a very high payout, although most Megaways slots do it very well. Up to 4,000 times the bet per spin is promised, which seems low. However, since there is an RTP of 96.70% (the highest setting of the RTP range), the high volatility rating is not as problematic as it seems at first glance.

The design of Big Bass Bonanza Megaways is similar to what we have seen in the other versions of the series. It’s the same ocean-themed design, with fish swimming in some of its symbols and the fisherman as the main character, along with his gear.

For the list of symbols, they went with the usual ones found in other slots in this series. It’s a mix of five Royals initially, 10 to A for the lowest paying positions. Then we get the symbols with the fisherman, the fishing rod, the float, the dragonfly and the tool box. They also added various fish, a fishing net like Wild and the classic scatters.