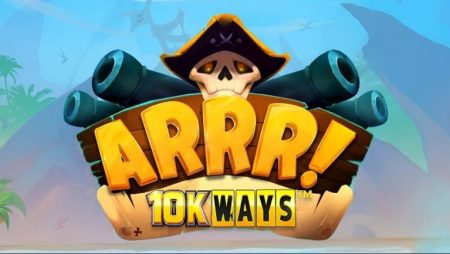 This pirate adventure is set on a tropical island with blue seas and green palm trees in the background. The coils have a black background and a wooden frame. The main grid contains 6 reels and 4 rows, and there is a horizontal roller above reels 2, 3, 4 and 5, giving them an extra row with a total of 5 positions. ReelPlay has done a lot of work to show us good-looking graphics with clear and prominent colors.

The lowest paying symbols are six coins. Two of them are in silver, one with a death skull and the other with an anchor. The other lower paying symbols are four gold coins with the symbols of the deck of cards clubs, spades, diamonds and hearts. The lowest paying symbols pay between 0.1X-0.2X to get 3 and between 0.5X-1.2X if you get them on all 6 reels. The 4 highest paid symbols are the sea monster Kraken with the appearance of an octopus, a green parrot, a pirate and the pirate captain. They pay between 0.25X-2.50X for landing 3 and 2X-50X for landing 6. The Jolly Roger symbol replaces all paying symbols, but not the gold treasure chest; the scatter symbol of the game.

All symbols in a victory explode and vanish into thin air while other symbols fall from above. If there is a new win, the symbols involved will also explode, making room for new symbols. This goes on until new wins can be made, giving the player the ability to score several wins in one spin.

The death skull Jolly Roger wears a bandana and a patch on his left eye. In the other eye there is fire and two swords are crossed under the skull. This Wild symbol substitutes for all paying symbols, but not the scatter symbol. Jolly Roger can only appear in the Cannon Wilds feature and always wears a random 1X-5X multiplier.

Cannon Wilds
This feature is activated randomly after every spin that did not lead to a win. In the lower left corner, a large black cannon appears, firing at the reels. The cannon shoots 1 to 3 Wild Jolly Rogers anywhere on reels 2, 3, 4 and 5, but the death skull cannot appear on reels 1 or 6 or the horizontal top reel. If the Wild Bonus is part of a win, use its 1X-5X random multiplier number to multiply it with the win. If more than one Jolly Roger contributes to a winning combination, the multipliers of the symbols are multiplied with each other. The Wild symbol cannot land on a location that contains a scatter symbol treasure chest.

The red and gold treasure chest with a gold lock is what you need to open the Bonus Respins. Landing 4 or more Scatter symbols anywhere on the grid will activate the function.

Gamble
This feature gives you the ability to multiply all wins up to 5 times, making even small wins quite good. It’s not an all-or-nothing bet like most game features, but it does allow you to try at least twice. Gambling on this feature allows you to spin a wheel with green and black fields, turning you into a winner if you land on green fields.

The feature starts with a 1X multiplier, which advances to 1.5X if you win the bet or decreases to 0.5X if you lose, giving you the option to play again. These are the steps of the multiplier:

Bonus Respins
This feature is activated when 4 or more scatter symbols from the chest land anywhere on the reels. Treasure chests reveal random 1X-1000X multipliers, remaining in their locations while all other symbols are removed. The player receives 3 respins with the possible turnout of landing one of the three prize symbols, or nothing on empty positions. Each time a prize symbol hits the reel, the respin counter is reset to 3. Here’s what the 3 prize symbols do:

Treasure Chest = This is the same good old scatter symbol that brought you here. It has a random multiplier of 1X to 1000X.

Captain = Our dear captain becomes super valuable in respins. He gets a multiplier with the value of all multipliers from the visible prize symbols.

Kraken = This huge octopus stretches out its arms and achieves a multiplier value equal to all adjacent prize symbols.

When you run out of respins or all positions contain an award symbol, prizes are collected and awarded. If you manage to fill the grid with symbols, it is cleared and you will get a new respin session.

Buy bonus
This is for anyone looking forward to getting Bonus Respins. Simply pay 100 times the bet and you will get a spin resulting in 4 chests, opening the Bonus Respins. The RTP in the purchase bonus is 96.99%, significantly higher than in normal play.