At the fruit market with Blueprint! Here is Fruitopolis Fortune Play! 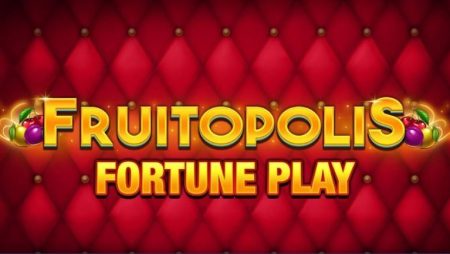 The cheap symbols in Fruitopolis are fruit and are very familiar in the casino world. Landing any of the playing card symbols 10, J, Q, K, or A will give the player between 0.50X-1X the bet for a combination of 3 and 5X-10X for a combination of 5. The plus symbols precious are the cherry, lemon, plum and 7. They pay between 2X and 5X the bet for 3 and 15X-25X the bet for 5. There is also a mysterious symbol in the shape of a gold coin that turns into a random symbol after landing. All the mysterious symbols transform into the same symbol. Finally, there is the Money Scatter symbol that brings cash prizes and activates the Money Spins function.

The mysterious symbol is a gold coin that turns into any other symbol after it lands. If multiple reels have mystery symbols, they all turn into the same payout symbol. If a mystery symbol lands in Fortune Play mode, it will land in the same location on the following grids.

The star-shaped Money Scatter symbol takes you to Money Spins. The money symbol contains a cash prize that is paid out at the end of the money spins.

The Money Spins feature is similar to the Hold & Win and Link & Win features found in other games. It starts whenever a star-shaped money symbol hits the reels. The symbol is locked in its position while all other positions are cleared. If several money symbols stop, they are all stuck in their positions. The player gets 3 spins with the possible result of getting blanks or new money symbols. Each time a new money symbol hits the reels, the spins are reset to 3. The feature ends when the player runs out of spins or when the reels are full of money symbols. The values ​​of all symbols are added up and paid.

The Fortune Play feature is the base game multiplied by four with a twist. You can choose to play Fortune Play at any time by simply pressing the left button and you can return to the base game at any time by pressing the same button. Fortune Play costs 20 times more than the regular bet, which means that the minimum bet is 2 instead of 0.10 in the base game. The player can turn 4 grids placed in a square with two on top of the other two. The function starts by spinning the rollers in the upper left, then make the second spin on the grid in the upper right before moving down to the left and ending with the last grid in the lower right corner. If the mystery symbols land on a grid, they are passed on to others that have not yet been used. If you fill a reel with mystery symbols on the first spin, the other three grids will be filled with mystery symbols on the same corresponding reel. If you land mysterious symbols on the last grid, they will not be transferred anywhere. The mystery symbol reveals the same payment symbol on one grid but can reveal another one on another grid. The feature ends when the four reels have been spun once and any winnings on one or more grids are paid out.