Big Bass – Keeping It Reel! Another chapter for the Pragmatic signed saga! 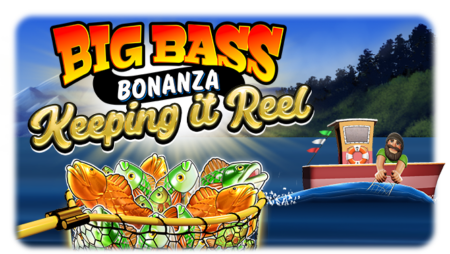 The symbols with the lowest payouts are 10, J, Q, K and A. Landing 5 of the same type of symbol pays between 5X and 10X the bet. The highest paying symbols are the fish, the bait box, the dragonfly, the fishing rod and a float. If you get 5 symbols of the same type, the bet pays between 20X and 200X. The highest float symbol already pays when you get 2, which then gives 0.5 times the bet.

The happy fisherman showing the catch is the wild symbol, while the jumping fish is the scatter symbol in the game. During the spins you will also be able to get money symbols which are fish with prizes on them and within the bonus game you can also get a golden wild symbol.

The game’s wild symbol allows you to get more winning combinations by substituting for other symbols, except for scatter symbols. It can land on all reels within the bonus game.

The game’s fish pay symbols are also the fish money symbols within this game, where they get random values ​​on every spin performed based on a predefined set.

During the spins you can get normal wilds and golden wilds, both of which collect values ​​from the current money fish symbols on the reels. The big difference is that the golden wild will also collect the total pot value. As mentioned, each wild symbol that lands will be collected up to one meter and you will reactivate the feature every time you collect 4. This gives you 10 extra free spins and depending on whether it is the first, second or third retrigger, you will receive a multiplier fish money of 2X, 3X or 10X respectively. After reactivating the bonus game 3 times, you cannot reactivate more free spins.

During the laps you can also take advantage of the Dynamite, Hook and Boat features.

Dynamite = If you only got wild symbols but no fish symbols, then this feature can be activated randomly and fish symbols are placed on the reels.

Hook = If you got fish symbols but no wild cards, the hook function can be activated randomly and a wild symbol will be fished out on the reels.

Boat = If you only got wild symbols but no fish symbols, the boat feature can be activated randomly, at this point a boat will drive on the reels and replace random symbols with fish money symbols.

You can activate the ante bet function by paying 50% more of your bet amount, which will increase your chances of activating the bonus game. This does not affect the payment of symbols.

If you want to take advantage of the free spins feature right away, you can use the bonus purchase feature. You pay 100 times and then the bonus game is triggered by randomly landing 3, 4 or 5 scatter symbols.