Big Become Bigger! The Angler Raises the Reels with The Bigger Bass Bonanza! 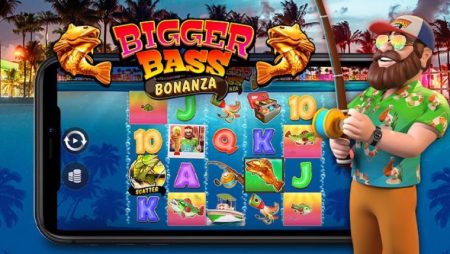 What was surprising was that in many ways it didn’t do as much slots as Fishin ‘Frenzy already offered. However, it had a much more complex bonus game, which could grant multipliers of up to x10 to increase scatter wins, even if the maximum payout was a bit disappointing. The Big Bass Bonanza has garnered enough players to warrant a following. This led to the Bigger Bass Bonanza, which wisely didn’t change the core gameplay much, but added a few things to really make it a bigger game.

Some changes are immediately evident. First, an extra line has been added, so the Bigger Bass Bonanza action takes place on a 5-reel, 4-line game board with 12 fixed paylines. The background image has also been revised. Now, it doesn’t look like players are deep-sea fishing, but they drift closer to a palm-lined coastline and neon-lit buildings. Somewhere hip, suggested by the most funky soundtrack, in the 80’s electro style, which replaces the amiable plinking of the original.

Moving on to the mathematical model, some things have changed, some things have remained the same. The default RTP remains the generous 96.71%, although it is variable, so check the help files to find out which version you have in front of you. As part of the “biggest” restyling, volatility increased to a high level, now rated 5 out of 5, compared to 4/5 in the previous one. The bets have changed to match the paylines, starting at 12 cents and increasing by odd levels until reaching € 240 per spin.

Big wins are possible by collecting scatters in free spins, while regular line wins occur when matching symbols land left to right on adjacent reels from the left-most reel. 10-A real card is used as low-value symbols, while a tackle box, a lure, a fishing rod and a boat are the highest winnings. Big wins are worth 50 to 200 times the bet for five of a kind, and getting a full line of fish scatter pays the total amount of cash value. There is also a wild symbol, which appears in free spins to replace the normal payment symbols and collect any money symbols in sight.

The characteristics of the Bigger Bass Bonanza are the same as the Big Bass Bonanza, with the added benefit of an extra line and symbols of greater value. Scatter symbols appear on all reels and 3, 4 or 5 in sight award 10, 15 or 20 free spins.

During the free spins feature, when the wild symbols land at the same time as the money symbols, the fisherman collects all their values ​​on the player’s behalf. Money symbols land with a randomly assigned money value. In this game, there is an elusive fish scatter that is worth 4,000 times the bet.

Additionally, wild symbols are collected on a meter displayed above the reels. Every 4 wild symbols collected reactivates the feature, awarding an additional +10 free spins and a multiplier for the wild symbol collector. Players get x2 for the first retrigger, then x3 for the second and x10 for the third. How it works is that if x2 is active, when the fisherman collects money symbols, he doubles their value. After three reactivations, the function cannot be reactivated again.