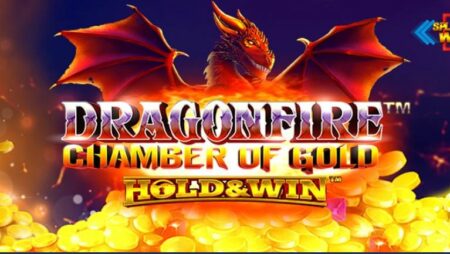 The lowest paying symbols are 10, J, Q, K and A. All pay the same, giving the player 2 times the bet for a win containing 5 symbols. The highest paying symbols are 5 warrior characters. You will find a red-haired woman holding a dagger, an elven-looking man with a bow, a long-bearded wizard, a warrior wearing armor and a sorceress sitting on a throne. These characters will award between 3X and 40X the bet for a full win containing 5 symbols. You will also find two Wild symbols that activate different functions and a Dragon Egg Scatter symbol, which can activate the Hold & Win function.

The Splitting Wild symbol consists of two dragon heads that look left and right. It appears on reels 2, 3 and 4 and substitutes for all symbols except the scatter. Whenever a splitting wild lands, activate Splitting Wild Respins.

Two Walking Wilds are created by splitting wild in Splitting Wild Respins. The symbol has the text “wild” written on it and an arrow pointing left or right. Just like the other wild symbol, it substitutes for all symbols except the scatter. The walking wild has a multiplier that starts at 1X and increases by 1 with each step. The multiplier can reach a maximum of 3X.

Whenever a splitting wild lands, it creates a walking wild on each side, and the respins kick in. The walking wilds will move one step left and right to respin, and the respins continue as long as there is a wild symbol on the reels. New split wildcards can land during the feature, creating more wildcards.

Whenever two jokers collide, they create an expanded joker, covering all positions on reel 3 for the next respin.

The scatter symbol is a dragon egg that can land anywhere on the grid. Landing 5 eggs in any position will activate Respin Hold & Win. In the feature, the eggs will have a cash value of up to 500 times the bet.

Hold & Win Respins is activated by landing at least 5 scatter symbols. The dragon eggs will be kept on the grid while the rest of the reels are cleared. The player gets 3 respins with the option of landing blank or scatter on any position. Each time an egg hits, the respins are reset to 3. All eggs have a cash value, with the most valuable one paying 500 times the bet.

If the slot rewards you with the collector, the value of all eggs will be collected while the grid is cleared. You will then be able to land more eggs. The Hold & Win Respins feature continues until the player runs out of spins or until the grid is full of dragon eggs.

You can buy Hold & Win Respins for 100 times your bet. You can also pay 250 times the bet to activate the Dragonfire multiplier feature from the start.