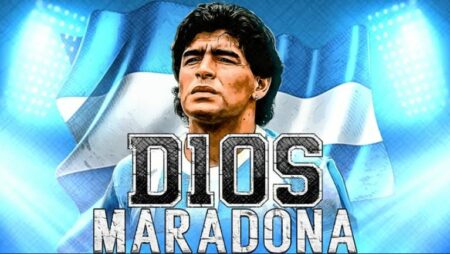 The lowest paying symbols are J, Q, K and A. They all pay the same, giving the player 5 times the bet for a win containing 5 symbols. The highest paid symbols are four jerseys representing Boca Juniors, Barcelona, ​​Naples and the Argentine national team. Getting a win containing 5 symbols will award between 7.5 and 40 times the bet. The Wild symbol substitutes for all the symbols mentioned, but not the Scatter or Money symbol.

The D10S bet doubles the chances of activating free spins. It will cost you 25% of your bet.

The Wild symbol is the Argentine flag. It replaces all normal pay symbols but not the scatter or money symbol.

The scatter symbol is an image of Maradona. It can appear on reels 2, 3 and 4. Landing 3 scatters in any position activates 10 free spins.

The Money Symbol is a golden balloon with a cash value. It can appear anywhere on reels 1, 2, 3 and 4. You can’t use the symbol to get regular wins; it is only useful in the Cash Collect feature, which is triggered by the scatter symbol D10S.

The scatter symbol D10S has an image of Maradona juggling with a ball in the head. He can only appear on the fifth reel and activates the Cash Collect every time he lands. In Cash Collect, the scatter D10S symbol expands to all positions on the reels, showing one of four different versions of Maradona in the jerseys of Barcelona, ​​Boca Juniors, Naples or Argentina.

Cash Collect begins as soon as the scatter symbol D10S appears. All visible money symbols will be collected by Maradona. The collection of money varies depending on which Maradona appears.

Boca Juniors Maradona = Activates a respin with all cash symbols and himself locked in their positions. If a new money symbol stops, it is held while the rest of the reels spin again. The respins continue until no new money symbol arrives and Maradona collects all the money.

Napoli Maradona = Collects all cash in sight and awards a cash raise.

Argentina Maradona = Collect all cash in sight and multiply the sum up to 5X.

Landing 3 scatters awards 10 free spins, including the latest D10S Super Spin. During the function, the cash collection function remains active. Any money symbol that arrives has its value added to one of the four displays above reels 1-4. After 9 spins, the money symbols are updated to show the value on the displays for each reel. The Super Spin D10S begins with the special Maradona appearing on the fifth reel, collecting all the money symbols that land on the other reels. The D10S Super Spin ends the free spins and it is not possible to reactivate the spins within the function.