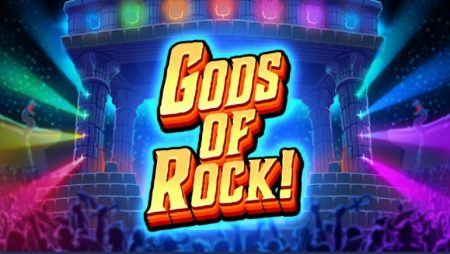 Gods of Rock is a Thunderkick video slot that has 6 reels, 4 lines and 466 ways to win. You can choose between making a Min.bet of 0.10 and a Max.bet of 100. This is an RTP that is around the average of 96.05%. During the spins you can take part in high volatility, which can give the lucky player up to an incredible 20,000 times the bet.

This slot offers a real show, where the band members along with some great features can make the stay very favorable. The features are Dropping Symbols, Wild Symbols, Reel Multiplier, Bonus Game and Wild Encore.

The game design consists of a rock theme in which we can take part in a rock concert with a band consisting of Lucifer, Thor, Medusa, Athena and Anubis. Against the backdrop of the reels, you can see the large audience shaking their hands intensely to the music, and the stage the band is playing on is made up of the reels.

When you spin the reels and create a winning combination, these symbols will disappear from the reels. Then new symbols fall to cover the empty positions, allowing you to create different winning combinations. This continues until new profits are created.

There are two different wild symbols that can land during the spins. These help create more winning combinations by substituting for other symbols on the reels. The wild charge has an extra feature along with the reel multiplier.

This wild charge has an additional function, every time it fills the reel multiplier, it will remove a bunch of symbols through an explosion. Which involves symbols in its vicinity, where there can be a minimum of 3 symbols and a maximum of 8 symbols. This charge symbol then falls and lands on the symbols below or at the bottom of the reel, where it turns into a normal wild card.

When symbols explode, a bonus marker is filled with the respective number of exploded symbols. Once filled with 56 symbols, the Bonus Game is activated. In the basic game, the indicator resets the symbols collected between the new spins played, while the indicator remains within the bonus game.

Once the bonus game is activated, you are greeted with 8 free spins, so by reloading the counter you get 3 extra spins. Within this function, the reel multiplier will remain during the spins, which increases the really big chances of winning.

When you fill the bonus meter with 30 symbols, the Wild Encore feature is activated. You will then receive 1 to 3 wild cards loaded onto the reels.