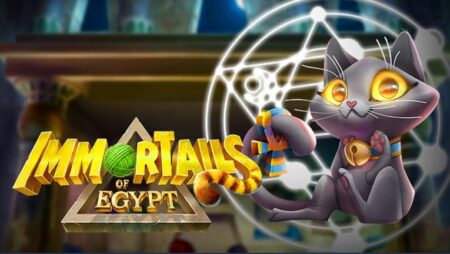 The lowest paying symbols in feline Egypt are 10, J, Q, K and A. Getting a payout of 5 of these symbols will award between 1X and 1.2X the bet. The highest paid symbols are a ball of yarn, a cat toy with mice on it, the snake Apep and the three cats Bastet, Mafdet and Sehkmet. They pay between 2X and 6X the bet for a win containing 5 symbols.

The snake and cats can also appear as wild symbols, substituting for all the normal pay symbols and paying for themselves. The Scatter symbol, represented by a pyramid, is what you need to activate the free spins.

Each time you get a win, the symbols involved will vanish and new symbols will fall from above. If you manage to make a new win, the symbols will disappear once again as new ones are added. The cats Bastet, Mafdet and Sekhmet transform into wild symbols on the first, third and sixth victory. Free fall wins end when you can no longer make wins and cats return to their normal state.

The three cats can be transformed into one of the three goddesses of the same name by achieving falling victories. Wilds substitute for all symbols except the scatter. If a wild cat is connected horizontally or diagonally with the Apep snake, it also makes the snake wild.

The scatter symbol is a pyramid that says “bonus“. Landing 3 scatters will trigger the free spins.

At the start of the free spins, an extra row is added to the reels. One or more reels will be marked on each spin during the feature. Whenever a wild symbol lands on a marked reel, it accumulates and expands to all 4 positions. There is also a fall multiplier that starts at 1X and increases by 1 every third win. The multiplier is used on all wins and is reset between each spin. Spins cannot be reactivated and the feature ends when the player runs out of spins.