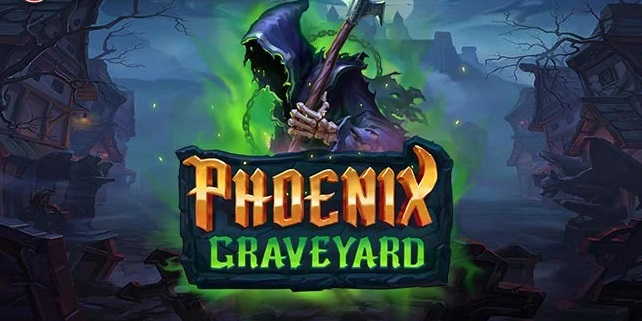 The game’s design is based on the theme of the grim reaper and the phoenix and we take part in an intense battle between these two. In the background of the reels, we can see a dark and foggy city, which gives a feeling similar to the movie Sleepy Hollow.

The lowest paying symbols are J, Q, K and A. Landing 5 of the same type of symbol pays between 0.6X and 1.2X the bet. The highest paying symbols in the game are people dressed in blue, red and yellow. If you get 5 symbols of the same type, the bet pays between 1.5X and 4X. There are two different wild symbols that can land during the spins, one is the Phoenix and the other the Grim Reaper. The game’s Bonus Scatter symbol consists of a petrified phoenix with the Bonus text beneath it.

The wild symbols in the game consist of the Phoenix and the Grim Reaper and substitute for all other symbols except the scatter symbols. If you get a full line of wilds, it pays as much as the highest paying symbol.

During your spins, bonus symbols can land in all positions, with the exception of positions that contain bonus or sticky wild symbols. During respins, the bonus symbols that land will be sticky.

During your spins, the various positions can be expanded, increasing the number of ways to win. They can display up to 10 symbols per location, as indicated by the plaque surrounding the location. These expanded winning modes remain during respins and within the bonus game they remain throughout all spins. This can be triggered by Sudden Death or Grim Reaper attacks.

The symbol that lands inside this tombstone will correspond to the number shown. The jokers land with a 1X multiplier from the start and can therefore be increased, so that a joker multiplier that stops inside a tombstone will have its value multiplied by the value of the tombstone.

Fenix ​​Wild
This special wild card has a jump function, where it will stay on the reels during respins. At each new spin, he will jump to a new random position and before the first jump, his wildcard multiplier will be based on how the tombstone in that position is won, if there is one.

Grim Reaper
This symbol can land on reels 3, 4 and 5 and is a wild card that activates respins. With each new respin it will move one step to the left, so the repsins will continue as long as it remains on the reels. The Grim Reaper can also activate expanding ways of victory and battles against the Phoenix.

When a win is created, this special wild will attack all phoenix and highest paying symbols that are above, below, left and right. When this attack occurs, the affected symbols will be cut and expanded to the number of win modes indicated by the gravestone. When the Grim Reaper attacks the Phoenix, one of three results will occur:

Feather Wild
This wild feather can be placed when a battle between the Grim Reaper and the Phoenix takes place and will transform into a phoenix in the following round. If there is a tombstone in its position, it will receive a multiplier equal to its value, before jumping to a new position.

This feature can be activated randomly and will cut a position that does not contain a sticky symbol by receiving the same amount of winning ways as indicated by the tombstone.

If you get 3 or more scatter symbols, the Bonus Game is triggered. Depending on the number of scatter symbols you have earned, you will receive different amounts of free spins and Phoenix wild symbols.

These wild phoenix symbols will be placed on any of the locations where the bonus scatter symbols landed. They then receive a multiplier equal to the number of winning ways on that position. It will then move to a new position with each new lap that occurs and will remain throughout the entire bonus function. The gravestones you have on the reels of the base game will follow you into this bonus game and you can reactivate extra free spins, where the previous Phoenix wild symbols remain on the reels.

X-iter
You can use X-iter mode if you want to take advantage of any of the features right away, where they cost and give the following:

10X (Sudden Death) = This will give you a spin where the Sudden Death feature is activated on all positions in a row. This then creates expanded payout modes in all symbol positions on the row, where it can trigger 1, 2 or 3 rows.

25X (Grim Reaper & Phoenix Battle) = This will trigger a round where a battle between the Phoenix and the Grim Reaper takes place.

100X (Buy Bonus) = This will give you at least 3 scatter symbols, which in turn will give you 6 free spins and 1 Phoenix wild symbol.

200X (Big Bonus) = This gives you at least 4 scatter symbols, which in turn gives you 8 free spins and 2 Wild Phoenix symbols.

500X (Super Bonus) = This gives you 5 scatter symbols, which in turn gives you 10 free spins and 3 Wild Phoenix symbols.