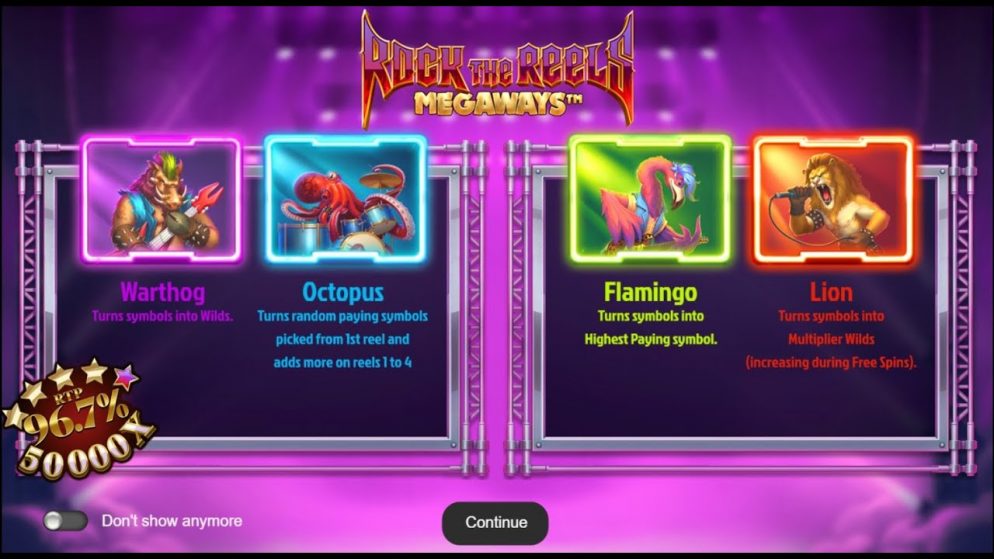 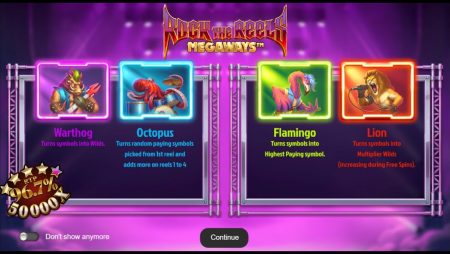 Rock the Reels Megaways is played on a 6-reel Megaways slot. The number of symbols on each reel changes with each spin. This affects the number of ways you can create a winning combination. Winners are formed by landing 3 or more matching symbols or wilds on adjacent reels, starting with reel 1. At most, you will have 117,649 active Megaways.

The stake levels here range from 10 cents to 50 euros per spin.

Rock the Reels Megaways RTP is 96.2%, just above the average for slots. Volatility is on the high end with the maximum payout coming in at 25,000 x your total bet from a single spin.
A rock concert with the animal band is the setting for the Rock the Reels Megaways slot. With the bright lights and the stage in the background, the images here are of a cartoonish quality that is well done.

The rather raucous rock soundtrack that explodes in the background will not be for everyone, but it is not too intrusive and there is always the mute button for those with sensitive ears!

On the reels you’ll see heavy metal-style royalty A to 10 alongside a pick, tambourine, mixer, and powerful speaker set. The most rewarding symbols pay 15 times your total bet if you get 6 in combination. The spotlight symbol is the joker with the guitar acting as the scatter symbol of the game.

You can play Rock the Reels Megaways on all devices including desktops, laptops, tablets and mobiles.

The 4 members of the animal rock band are at the center of most of the best action in Rock the Reels Megaways. When they land in the top window of the reel, they assign an assortment of modifiers. You can get these extras in free spins and in the base game. There are a total of 6 bonus features.

Tumbling Reels function
After a winning combination arrives, the Tumbling Reels feature is activated. Winning symbols are removed from the grid and new symbols are displayed and replaced. A new payment consideration follows. If a new win is formed, a new cascade follows. These continue until there is a cascade with no new winnings.
The 4 members of the animal gang can appear in the top reel spinning horizontally. When they land, they each provide an animal modifier function for rotation and possible falls. Here’s what they offer:

Warthog Feature: When this symbol stops, between 2 and 4 symbols on reels 1 to 4 will be transformed into a wild card.
Octopus feature: placed in the upper window of the reel, 2, 3 or 4 symbols will turn into the same symbol. This symbol will correspond to 1 of the symbols already present on reel 1.
Flamingo Feature: When the flamingo flies into sight on the reel, 3 or 4 symbols on reels 1, 2, 3 or 4 will turn into the most rewarding symbol.
Lion Feature: The Lion modifier adds a pair of multiplier wilds to reels 2 and 3. These new wilds offer a 2x boost in the base game.
The Free Spins feature is activated as standard by landing 3, 4, 5 or 6 scatters anywhere on the reels during the same spin. You can therefore expect 8, 10, 15 or 25 free spins respectively.

All animal modifiers can hit in free spins as well as in any spin in the base game. The Lion multiplier is potentially even more valuable in free spins. This is because the multiplier value will increase throughout the feature every time the Lion appears.

Finally, reactivations are also possible here. If 3, 4, 5 or 6 scatters are rolled there will be another round of 4, 6, 10 or 12 free spins which are added to your total. Without limits.

Rock the Reels Megaways slot takes the bones of this mechanic (cascading reels, variable number of Megaways, and free spins) and adds some extras in the form of animal modifiers.

The most profitable is the Lion feature which adds wild multipliers to reels 2 and 3. This feature is enhanced during free spins as the multiplier value increases with each Lion that lands on the reels. The key to the biggest winnings will naturally come from this growing multiplier.