Isoftbet takes us to the Grand Canyon with the Wolf Canyon: Hold & Win! 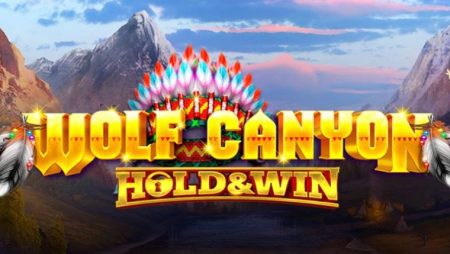 The Wild symbol is a totem with a bird’s head and wings. We don’t know exactly what kind of business wolves have with Native Americans. It could be that iSoftBet was inspired by the hit movie Dances with Wolves, with Kevin Costner at its peak in the early 1990s. The Wild symbol substitutes for all normal paying symbols, but not Scatter or Cash Moon.

The scatter symbol of the wolf canyon is a landscape image, which says “Wolf canyon”. It can appear on reels 1, 3 and 5. If you get 3 scatters anywhere on the grid, the Wolf Feature Pick is activated. Obtaining 3 scatters in free spins awards the same number of spins with which the player started the feature.

The Cash Moon symbol is a bright blue and white full moon. The landing of 5 or more moons anywhere on the reels activates the Hold & Win function.

The Lucky Dreamcatcher can really change everything. It locks to the right of the fifth reel and can activate in any spin. The dream catcher will award a cash prize of 8X, 88X, 888X or 8888X the bet. The dream catcher can shake during the game, but this does not guarantee that it will trigger.

Landing 3 scatters activates this feature, giving you free spins or Hold & Win. The player can choose a white or black wolf, which will open one of the two mentioned features.

Free spins
When the free spins start, you will be given 8, 10 or 12 spins with 25, 50, 75 or 100 extra wild symbols added to the reels. Landing 3 scatters in the function will reactivate the initial amount of laps.

I must say that Hold & Win has now become an iSoftBet brand. Sometimes it pays quite a bit, like in Colossus: Hold & Win, where you can score up to 10,000 times your bet. Other times, it has a more moderate maximum payout such as in Lanterns & Lions: Hold & Win, where the maximum feature payout is 1000 times the bet. So it is also in the Wolf Canyon.

The feature starts whenever the player gets 5 or more Cash Moons on the reels. The moon symbols contain a value assigned to the player at the end of the function. All of the moon symbols are locked in place while the rest of the reels are spinning. You get 3 spins and you can land blanks or moon symbols on each location. Whenever you get a new moon symbol anywhere, the spins are reset to 3. The function continues until you run out of spins or all 15 positions have moons on them, which will give you 1000x Grand Award the bet. Any moon can also contain the Mini, Minor and Major prizes, which award 30X, 100X and 500X to the bet respectively.