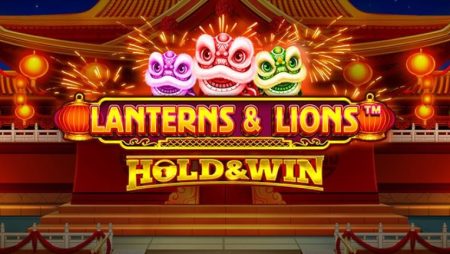 The design of the game is based on the Cai Shen theme from Chinese mythology, where we can collect large quantities of precious gold objects together with this god. In the background of the reels you can see a temple with gold decorations, where even the symbols that can land on the reels are surrounded by gold.

The lowest payout symbols are 9, 10, J, Q, K and A. The highest payout symbols are gold coins, firecrackers, a turtle and a gold cat. The wild symbol in the game consists of the Cai Shen himself and the scatter symbol consists of the dancing lion symbol. By landing the right amount of golden lantern symbols, Respin Hold & Win can be activated. Let’s find out what the features do.

The game’s wild symbol helps create more winning combinations by substituting for other symbols, except the scatter and lantern symbols. This symbol can also appear as a fully stacked symbol on reels 2, 3 and 4.

If you get 3 scatter symbols on reels 1, 3 and 5, the Dancing Lions feature selection is activated. You will then be awarded the free spins or the Hold & Win feature. During these free spins, you will get 25, 50, 75 or 100 wild symbols placed on the reels, giving you the opportunity to create more winning combinations.

When spinning the reels in the base game, the Lucky Envelope feature can be activated randomly. You will then be awarded an instant win of 8X, 88X, 888X or 8888X the bet.

Among these lantern symbols that can land within the Hold & Win Respins function, there may also be Mini, Minor and Major lantern symbols that are worth 30X, 100X and 500X respectively the bet. If you manage to fill all the positions, you will be awarded the Grand Prize which pays 1000 times the bet.