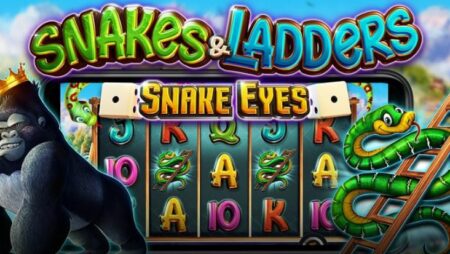 The lowest paying symbols are 10, J, Q, K and A. They pay between 5X and 10X the bet for a 5x payout. The highest paid symbols are a woven basket with peeping eyes, a green and yellow snake, a banana, and the Reel Kingdom gorilla wearing a crown.

These 4 characters pay between 15X and 50X the bet for a full payline. The Wild symbol substitutes for all symbols except the Bonus Scatter symbol, which can activate the board game feature.

The Wild symbol is a die with 1, 2 or 3 points. It substitutes for all symbols except the Bonus Scatter symbol and the points represent a multiplier of 1X, 2X or 3X. The multiplier applies to the total win for that spin. The jokers also pay for themselves, giving the same winnings as the gorilla.

The Snake & Ladders Board Bonus is a large board game consisting of 144 squares in a 12 × 12 grid. You start with the first square with the monkey head as a pawn. You play with 12, 14 or 16 dice rolls depending on whether you have activated the feature with 3, 4 or 5 scatter symbols. If you get 4 or 5 scatters, there is also the possibility that one of the activation symbols turns into a bonus snake symbol, awarding 2 extra rolls before the start of the function.

Each roll is made with two dice which can end on any number between 1 and 6. Thus, the player will move between 2 and 12 steps per die roll. The board has various symbols randomly placed on positions, rewarding you with different things when you land on them:

Cash Prize = A random value between 4X and 100X the bet. Landing on a square with a cash prize adds its value to the total win of the round.

Multiplier = Multiply your total win so far by its multiplier number.

Ladder = The ladder is a shortcut that takes you to the end of the board faster. When the token lands on a ladder, it is brought directly to the top position of the ladder.

Snake = The snake is another shortcut, but you have to stay away from it. Instead of climbing up the ladder, the snakehead will lead the player to the tail, going back to the game board.

Banana = Landing on a banana triggers a sequence in which the values ​​of random cash prizes are added to the grid in random positions. When landing on a banana, all other bananas are removed from the board.

Rope charmer = Any square can have a hidden shortcut with the rope charmer. When you land on it, the shortcut will appear and you will be moved to a random position higher on the grid.

The function ends when the player runs out of dice rolls or when the last box (144) is reached. However, there is the possibility to reactivate the bonus and start over from the beginning. When you reach the last square, you can roll two dice and if they end up showing a double (1-1, 2-2, 3-3, 4-4, 5-5 or 6-6), you get to play the function again with the same number of launches as when it was activated.

Also, landing 1-1 in the feature will give you an extra shot. Whenever a double occurs in the feature, a segment of the snake will be filled above the board. The landing of four doubles will fill the complete snake, giving you another session of the function at the end of the current one.

The Snake & Ladder Board bonus has a guaranteed win of 20 times the bet. If you haven’t reached that amount by the end of the feature, Rage Mode will activate.

The monkey head begins its furious journey from where the board game function ended to the final position. Collect all the monetary values ​​and multipliers along the way, but ignore all the ladders, snakes, bananas and rope charmers.