New chapter for Elk! Here is the Avalon Gold! 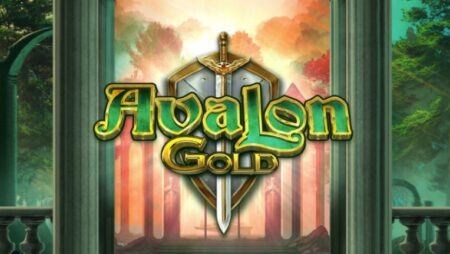 When you create a winning combination, the Avalanche feature is activated. Then all the symbols that were part of the winning combination will disappear from the reels and new symbols will fall to cover the empty positions. This continues until new wins are created. With each winning avalanche, an extra line is also added, which can increase up to 8 lines, offering 262144 ways to win, but when no more wins are obtained, the lines are reset back to 4. Within the bonus game, you can unlock the security levels, which means it does not reset the rows to the lowest value but to the current level of the security level.

During your spins you can randomly get large symbols in the size 2X2, 3X3 or 4X4. For example, if you got a large 4X4 symbol showing Kane, this corresponds to a group of 16 Kane symbols. If you have empty positions under a large symbol, it will be filled with a 1X1 of the same symbol type as the large symbol.

The game’s wild symbol helps to allow for more winning combinations by substituting for other symbols, with the exception of the scatter and mystery box symbols.

You can get expanding wild symbols behind the normal payout symbols, which will expand upwards when the symbol shown opposite is part of a win. This results in multiple winning combinations using the expanding wildcard in which it fills all empty positions upwards up to the current maximum number of rows.

You can randomly land mystery box symbols on the reels during your spins and if you get 5 or more of these at once, one of its potential features is activated. All mystery boxes that have landed will display the same symbols, which can be wild cards, paying symbols or Avalon features. Avalon features can display coin win, multiplier, redrop, collect or swiper.

Coin win = The value shown on the tokens will be multiplied by the amount of your bet and then paid.

Multiplier = This will multiply its value by all revealed coin values.

Collect = This will collect all the open mystery boxes and then these will reveal something new.

Release = This will give you an extra avalanche of new symbols, with the mystery boxes you landed staying in their positions.

Swiper = This will scroll a 1 before the already revealed coin value, where for example a 4 becomes 14.

If you get 3 or more scatter symbols, the Avalon Free Drops feature is activated. Depending on whether you got 3, 4, 5 or 6 scatter symbols, you will receive 10, 15, 20 or 25 free spins respectively. During the bonus spins, you can reactivate extra free spins where you get the same amount when activating the base game. As mentioned above, you can take part in the safety levels within this bonus game, where the ranks will increase by 1 each time you perform an avalanche that results in a win. When you no longer create a win, you will start from this level of security that you have unlocked. Depending on how many lines you have unlocked, you will get the following number of ways to win:

In the bonus game, the mystery boxes will remain persistent until activated. To activate them, you need to land 5 or more of them with the same properties as the base game.

If you want to take advantage of any of the features directly, you can use the X-iter mode, in which you can make the following payments:

5X = Take part in a spin where you are guaranteed to get a great symbol.

10X = Take part in a round where you are guaranteed to get an expanding wild.

50X = Take part in a round where you are guaranteed to get 5 mystery boxes.

500X = Activate the super bonus game, where mystery boxes are persistent throughout the function.