New Release For Elk! Here is the Taco Brothers Derailed! 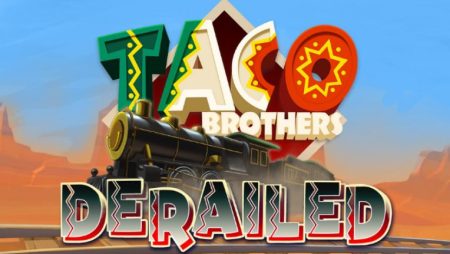 The lowest paying symbols are the maracas, the whistle, the buffalo skull, the lantern and the money vault. If you get 6 symbols of the same type, you pay between 0.5X and 2X the bet. The symbols that pay the most are the brothers with frames in the colors green, blue and red. Landing 6 of the same type of symbol pays between 5X and 50X the bet. The golden W is the wild symbol of the game and the three brothers are the walking wilds. Captain Diaz appears as a savage in the bonus game where he is behind bars and the lady in purple is the Senorita symbol of the game. The three brothers together are the scatter symbol, with the word Bonus appearing on this symbol.

The game’s wild symbol helps allow for more winning combinations by substituting for other symbols, with the exception of scatter symbols, walking multiplier wild, walking wild, senorita and Captain Diaz.

During your spins you can land wild symbols on the reels and once one has landed, it will move one step to the left, creating a respin until it comes off the reels. As long as there are walking wilds on the reels, you will receive respins.

During your spins you can get walking multiplier wilds on the top row, which will also move one step to the left with each respin it generates. What distinguishes this from the aforementioned walking wild card, is that all normal wild symbols also receive this multiplier as long as the walking multiplier wild card is in sight. If you create a win that includes multiple wildcard multipliers, these will be added together before being applied to the payout.

If you get 3 scatter symbols, the Bonus Game is activated by landing these scatters on reels 2, 3, 4 and 5. Within this bonus game, you are guaranteed to land the three walking taco wild brothers. . These will land one by one on the sixth reel and move to the left. They have multipliers that change in size each time they move and are applied to all winnings in which it is included.

If you get 4 scatter symbols, the Super Bonus Game is triggered. Once this bonus game has been activated, all three taco brothers will land on reel 6 as walking wild multiplier symbols. They will then move to the left at the same time, generating respin as long as they remain on the reels. Captain Diaz will not be able to block the taco brothers and is a wild symbol during this game.

You can choose to use X-iter mode if you want to take advantage of specific features right away, so these are and cost the following:

2X = Double your chances of activating the bonus game.

10X = You are guaranteed to land a walking taco wild sibling.

25X = You are guaranteed to get a walking multiplier wild taco brother.