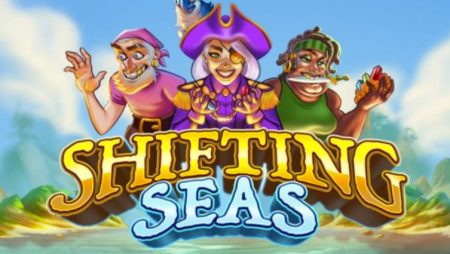 The game design is pirate themed, in which we are looking for precious hidden treasures. In the background of the reels you can see the pirate bay where you can see mountains covered with plants.

The lowest paying symbols are 9, 10, J, Q, K and A. Landing 6 of the same type of symbol pays between 0.5X and 0.8X the bet. The average payout symbols are the Parrot, the Buccaneer (pink), the Pirate (green) and the Captain (purple). If you get 6 symbols of the same type, the bet pays between 1X and 1.8X. The highest paying symbol is the treasure chest which pays 5 times if you get 6 and the pirate ship is the scatter symbol in the game. There are three different special wild symbols that can be landed, where these are Rush (purple), Surge (green) and Shift (blue). Let’s find out what the features do together.

The game’s wild symbol helps to enable more winning combinations by substituting for other symbols, except for scatter symbols.

When you create a winning combination, the Shift Win feature is activated. Then the rightmost roller will disappear and a new roller will be added from the left side. With each round win, the reel height will increase by 1 row for each reel, where this can give up to 7 rows per reel.

When a win is created, the avalanche feature is also activated. Then the winning symbols will disappear from the reels and new symbols will fall to cover the empty positions. This continues until new wins are created.

There are three different special wild symbols which are boost, rush and surge. These are activated by being part of a victory or by being pushed out of the playing area. You can activate more than one at the same time and they will always be activated in the order boost, shift and finally surge.

Boost = This will trigger an extra coil shift which means a new coil is added on the left side while the rightmost coil disappears. The newly added reel will be copied and will become identical to the adjacent reel.

Rush = This will randomly change from 4 to 8 symbols on the reels, so they show the same type of symbol.

Surge = This will randomly spin 1 to 3 symbols on the reels, so they become wild symbols.

This wild reel can be randomly activated on any reel within the bonus game. When it lands, it will move one reel to the right when one win per turn occurs and will start with a multiplier of 1X. If this wild reel is pushed out of a win per turn, it will be placed back on the first reel and its multiplier will be increased by 1X and will award 1 extra free spin. Although this covers up to 7 positions, it will only count as 1 payment method.