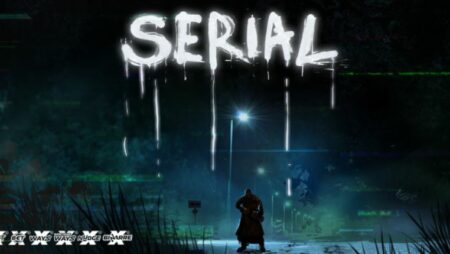 Nolimit City’s Serial introduces us to the raw world of Bodycam Butcher, a twisted psychopath with an insatiable thirst for blood.

Our first insight into the mind of this heinous killer sets the stage for a game that only Nolimit City can offer.

Enter the world of Serial if you dare, but you may wish you didn’t.

Here’s what we know about Serial so far. A full review will be posted when we have a playable demo and have tried it ourselves!

When performing a respin, two booster cells will open and it will land one with i
following symbols:

xWays®
Reveals 2-4 symbols of the same type. It can reveal any payment
symbol. If more than one xWays® symbol stops, all xWays® symbols will do
reveal the symbol.

xNudge® Wild
A stacked Wild symbol that will always be fully visible.
Each push increases its multiplier by 1.
Wild – The normal Wild symbol.
Character Symbols – Any higher paying symbol can land in the
Enhancer cells.

Respin
All winning symbols will remain on the reels and will be awarded a respin for
increase your winnings. Each respin that improves victory will award an additional one
respin. For each respin, the upper and lower booster cells open to the left
right – one reel at a time.

xWays® and xWays® infectous
xWays® can only appear in Enhancer cells or be transformed by a Scatter.
The xWays® symbols will turn into a normal payment symbol. It will reveal 2-4
symbols of the same type and increase the number of winning modes.
Infectious xWays®: The Ways symbol revealed will infect all others equally
normal size symbols on the 3-3-3-3-3 reel area to expand to the same size.

xBet®
For an additional 20% cost, the player is guaranteed a Scatter symbol on the
second coil. The payout for each symbol is not affected.
Bonus mode: “The search” and “The killing”
The Landing 3 Scatter symbols trigger the search. The spin count is the sum of
numbers brought by the Scatters. The Extra Enhancer cells on rollers 2, 3 and 4 open
until the area of ​​the roller 3-5-5-5-3 is formed. The landing of the xSplit symbol activates “The Kill”
spins and press +2 spins.
Landing 3 Scatters and 1 xSplit® symbol will activate The Kill. Apart from the
Search functionality, the xSplit® symbol will remain a Wild that jumps on reel 5 during
The killing.

xBizzarro®
The maximum payout of the game is 74,800 times the base bet.
If your winnings exceed 18,700 times, you will be given a 50/50 chance of getting a
an additional 18,700 times – up to three times. If you make the wrong choice, everything
the previous winnings will still be accounted for.

Nolimit Bonus – Buy Bonus
Buy your way straight into one of several bonus features, ranging from
78x to 480x the base bet.