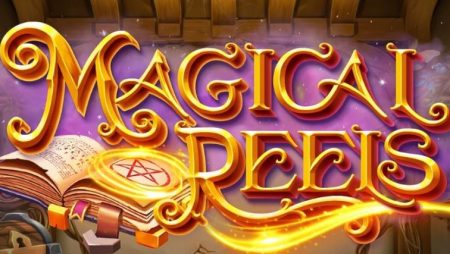 It feels like being in a witch’s house. Some tree roots are attached to the ceiling and the edges of the coils. On the tables there is a wide variety of plants, bottles of potions and a skull used as a candle holder. It is not a scary setting, however, rather something taken from a cute fairy tale. The grid has a dark background and the large colored symbols are easy to spot. The prize board with a counter that counts stars and multipliers for each of the eight pay symbols is located to the left of the grid. A magic wand will appear on the screen during your first few spins, randomly adding a few stars and multipliers to the prize draw. Quiet music contributes to the feeling of being in a children’s cartoon. To win, you’ll need to land at least 3 of the same symbols on one of the 20 pay lines running from left to right, starting with the first reel on the left.

There are 8 paying symbols and a scatter symbol represented by a spellbook. The lowest paid symbols are a blueberry, a shell, a mushroom and a yellow leaf. They pay between 1X and 1.50X the bet to get 5 on a payline. The most precious symbols in this magical house are four different bottles of blue, purple, red and orange potions. They don’t look intimidating except for the purple bottle with three eyes floating inside it. Potions pay between 2X and 5X the bet for occupying 5 positions on a payline.

This magical spellbook works wonders. You can get up to 5 books on the reels at a time, and each book contains 1-3 stars or a +1 multiplier. The stars and multipliers are randomly added to any of the 8 symbols on the prize board

Each of the 8 payout symbols is represented on the prize board to the left, with the 4 potion bottles at the top and the other 4 symbols at the bottom. Each symbol has 5 squares where stars can land and a multiplier starting at X1, adding +1 for each multiplier that stops. A magic wand randomly distributes a few stars and multipliers to the prize card on your first spin, so you don’t start your quest for stars and multipliers completely from scratch.

Whenever a spellbook ends up on the reels, it contains a +1 or 1-3 star multiplier. The stars and multipliers are randomly distributed to any of the symbols on the prize board. The multipliers will be used in the free spins bonus and the stars are just what you need to activate the free spins. The function starts whenever you have managed to collect 5 stars on any of the Award Board symbols.

Symbols that reach 5 stars on the prize board will be eliminated from the free spins, which means they cannot appear on the reels. Any symbol that reaches 5 stars during the free spins will also be excluded from the remaining spins. Each time you get a win, it will be multiplied by the multiplication number of that symbol on the prize board. Each symbol’s multiplier can only be used once in each free spin, so if you get a winning combination with the same symbol twice, it won’t be multiplied by anything on the second win. Any multiplier used will be reset to X1 after the free spins are over and any unused multiplier will keep its value.