Play’N GO In Novomatic Style Releases The Pharaos … Sorry .. The Eye Of Atum! 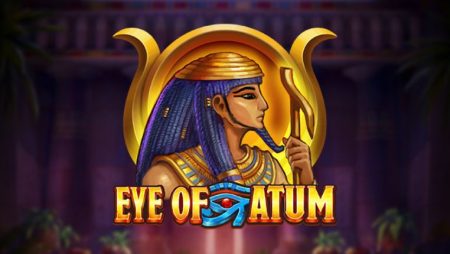 Atum was known as a self-created deity in Egyptian mythology. The Egyptians believed that Atum himself had lifted the soul of the deceased king from his pyramid and into the night sky. He has since been known as a Solar Deity associated with the Sun God, Ra.

As we have already mentioned in other slots, Play’n Go has opted for an Egyptian theme. When you open Eye of Atum for the first time, you are immediately drawn to the old-school graphics that remind us of Blueprint Gaming’s Eye of Horus, but above all … also as a game engine, Novomatic’s original Pharaos Tomb. If you are an older looking slot lover, you will feel right at home.

Atum harnesses unimaginable power, but will we be worthy of his fortune?

The highest-paid regular symbol in Eye of Atum is the Eye of Atum, followed by the Scarab, Bastet, thief and scourge, the Egyptian fan and the Ankh. The lowest paying symbols are Ace, King, Queen and standard Jack.

Wilds substitute for all symbols except scatters.

Eye of Atum is a 5 reel slot with 10 fixed paylines. To form a win, you will need to connect 3 or more of the same symbols from left to right, starting with the leftmost reel.

During any random spin in the base game, landing a Wild symbol on reels 2, 3 and 4 will activate the Expanding Wilds feature.

Once a Wild symbol is present on the reels, it will expand to fill the entire reel.