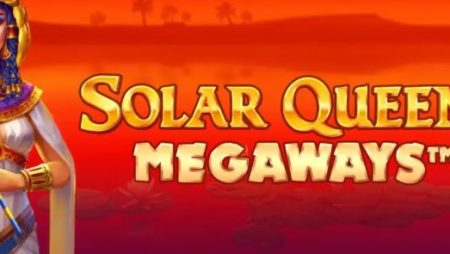 Software provider Playson upgraded the old Solar Queen to Solar Queen Megaways, enhanced with the help of the famous Big Time Gaming game engine. On the graphics front, it borrows heavily from Legend of Cleopatra Megaways, while the features come directly from the game it’s modeled on, Solar Queen. The original was one of the team’s most popular titles, so let’s see if a robust update will help it find extra glory amidst the crowded Megaways game collection.

As mentioned, the graphics are very close to the Legend of Cleopatra Megaways. This aspect is quite typically Playson, although it would have been more original if we hadn’t been dealing with another Egyptian-themed slot. However, the Solar Queen Megaways doesn’t have a bad visual impact; the deep blue background offers a nice contrast with the set of bright symbols that appear on the reels.

The game engine is quite original. We have 2 to 6 symbols found on each of the 5 reels, producing up to “only” 7,776 ways to win. This occurs when the corresponding symbols land on adjacent reels starting from the left side of the game board; any line is fine. A highly volatile game, Solar Queen Megaways has a default theoretical return value of 95.84%. The first step in this Nile side adventure is to select a bet from 20c to € 100 per spin, which can be played on any device.

Fewer ways than usual for a Megaways game are paired with lower than normal symbol values. Four animals were used at the bottom of the pay table; then, after them, we get Anubis, Horus and the Solar Queen as the three premium symbols. This latter trio is worth a payout of 1.5 to 2 times your bet to get five of a kind. Wild symbols are worth the same amount as the Solar Queen when creating winning ways of themselves. They also replace all symbols except the scatter.

The sun symbols appear on all reels, and when they hit, a flaming frame is added to the position they landed in. The flaming frames persist for 10-round cycles. At the end of the cycle, all Flaming Frames in sight are transformed into wildcard symbols. Editing bets starts a new spin cycle, but any previous progress is saved if you go back to the previous bet level.

In the base and bonus game, the sun symbols can increase winning combinations via a progressive payout multiplier. As it works every time a sun symbol stops in a position that already has a flaming frame, the payout multiplier increases by +1. After the 10th round of the cycle in the main game, the multiplier returns to x1. When free spins are activated, the current win multiplier is carried over and becomes the starting multiplier of the bonus round. Like Flaming Frames, multipliers are saved at each bet level if you change your bet.

The Scarab symbols are the scatters, and if you find 3 in sight, you win 10 free spins. In free spins, when the sun symbols land on the reels, they turn into sticky wild symbols. If a sun symbol lands in a cell already occupied by a sticky wild symbol, the payout multiplier increases by +1. During the free spins, the size of each reel is guaranteed to be at the minimum size of the number of sticky wilds on it, so players don’t miss out.

You have the option to buy free spins, paying 100 times the bet you will immediately activate 10 free spins with an initial win multiplier of x1.