Professor Clank’s Combinator By Yggdrasil and Reelplay Comes Into Gambling! 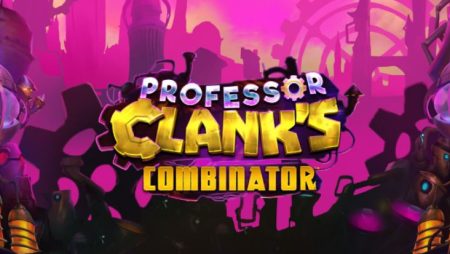 The design of the game is inventor themed, in which you, together with a professor, can take part in the creation of him. In the usual order, this professor also has a room full of gadgets, a so-called organized chaos. The reels are surrounded by metal tubes and tesla coils, where a fast-paced rhythm is played, adding an extra thrill to the spins.

The lowest paying symbols are 9, 10, J, Q, K and A. Landing 6 of the same type of symbol pays between 0.5X and 1.2X the bet. The highest paying symbols consist of a wrench, glasses, ray gun, and a robot. If you get 6 symbols of the same type, the bet pays between 2X and 10X. The wild symbol in the game consists of the professor himself and the scatter symbol consists of a glowing blue gear.

The game’s wild symbol allows you to get more winning combinations by substituting for other symbols, except for scatter symbols. It can land on all reels except reels 1 and 6.

When an explosion occurs and you have 2 or more types of symbols remaining on the reels, in addition to the wild and scatter symbols, they will turn into the most profitable type of symbol of those remaining symbols.

If a symbol is no longer in a winning position once the explosion and metamorphosis have taken place, one or more corresponding symbols will be placed to make it a winning symbol again.

Once the explosions, morphs and boosters have taken place, a new symbol will drop on any reel that doesn’t have 5 rows already filled. If it is not a matching symbol that falls, it will be removed immediately, but if it is a matching symbol that stops in a paying position, it will remain, thus extending the winning combination. Scatter symbols are always saved when they land and if these symbol drops result in a higher paying symbol combination then you will receive new drops. You can continue to receive symbol drops until all reels have filled 5 rows and when the drops are no longer made, you receive payment.

If you get 5 or more scatter symbols, the Bonus Respins feature is activated after all drops have been completed. All symbols, except the scatter symbols, will then be removed from the reels and you will receive 3 respins. Then a new symbol will fall on every reel that doesn’t have 5 rows filled yet, with only the scatter symbols saved when they land. The other symbols that land will immediately disappear and each time a scatter lands, the respins are reset back to 3. When you run out of respins, the accumulated scatter symbols will pay different prizes, which can include the following:

Bronze Bonus Prize = This is worth 10 times the bet.

Silver Bonus Prize = This is worth 50 times the bet.

You can activate the Bonus Respins feature directly using the bonus buy. You then pay 50 times the bet and then get 5 or more scatter symbols, which trigger the bonus game.