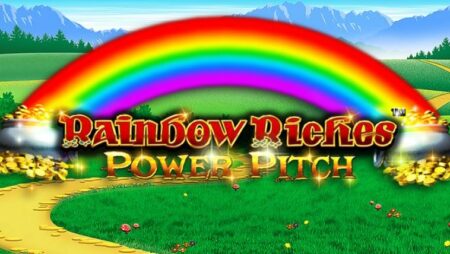 The lowest paying symbols in this Irish saga are J, Q, K and A. Getting a win of 5 symbols with any one of them rewards 10 times the bet. The highest paid symbols are the green Leprechaun hat, a silver horseshoe, a blue harp, a mushroom and the game logo.

These symbols pay between 30X and 200X the bet for a full payline. The Wild symbol substitutes for all the symbols mentioned, but not the Scatter symbol, which activates the Power Pitch bonus feature. Inside the Power Pitch await the special symbols Wishing Well, Rainbow, Fairy, Leprechaun and Multiplier.

The Wild symbol is a gold coin that says “Wild”. It can appear in any position in the base game and substitutes for all symbols except the scatter.

Pressing the crown symbol to the right of the reels accesses the Premium Play function. It has a small 3 × 3 grid with a single payline on the second row. You can make 3 different bets of € 2, € 5 or € 10 (or an equal amount if you are playing with another currency). The landing of 3 scatters will activate the Power Pitch function with a set of starting reels of 9 × 5, 10 × 5 or 11 × 5. Getting 1, 2 or 3 coins in Premium Play awards your bet 2 times, 4 times or 6 times. You can enter and exit the Premium Play feature whenever you want, returning to the normal base game.

The Power Pitch feature has an extended grid with 5 lines and 9, 10 or 11 reels, depending on whether you have activated the feature with 3, 4 or 5 scatter symbols. If you have activated the feature via Premium Play, the number of reels depends on the size of your Premium Play bet. The regular symbols are no longer in play and only empty spaces or the 5 special symbols can appear on each position. The player starts with 3 spins, which are reset to 3 each time a symbol stops. This is what special symbols do.

Wishing Well = When a Wishing Well lands, add up all visible multipliers and assign the total number as a multiplier on the symbol.

Rainbow = The rainbow increases the number of respins from 3 to 4. It has no cash value and can only appear once in the function.

Fairy = The Fairy flies away and doubles the amount of any value she interacts with. The Fairy has no cash value.