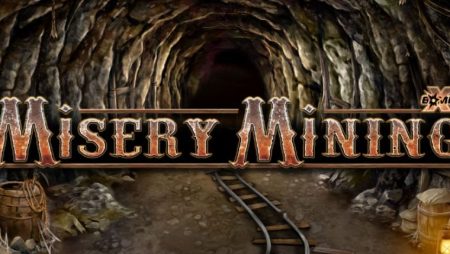 The game’s design is based on mines, in which we follow a dwarf in his search for liquid gold. Against the background of the reels, you can see the dark and eerie cave in which we find ourselves inside, where a couple of lanterns illuminate the dark place. It is very detailed graphics that we can appreciate, with atmospheric music that embellishes its presence. During the course of the game, you start with 3 reels and 3 rows, which can grow to 7 reels and 7 rows. Whenever a win is created, the winning symbols disappear, then new symbols will fall to cover the empty positions.

During your spins, you will start with a 3X3 coil setup that can increase to 7X7 with the help of the exploding xBombs. Locked locations are surrounded by barriers, and when you land an exploding bomb next to a barrier, it will move one step to the side, opening up more locations that symbols can land on. If you land a bomb in the center, all barriers will move one step.

You can trigger the collapse of the game by creating a winning combination, an exploding bomb or if you have less than 3 scatter symbols on the reels, these scatters will turn into explosive non-wild xBomb symbols. When a collapse is triggered, new symbols will drop to cover the empty positions, giving the opportunity to create new wins. The collapse continues until new wins are created.

The Misery Free Spins feature is activated when 3 scatter symbols land where you can also include 1 or 2 super scatter symbols in addition to these 3 scatter symbols. Depending on the number you get, you will start with a reel configuration of 3X3, 4X4 or 5X5 respectively. You will then be given the choice between two different bonus modes, which are Mouse mode or Rat mode.

Mouse mode (high volatility)
You will be greeted with 8, 10 or 12 free spins depending on the amount of scatter symbols you had while activating the bonus game. You can get 2 extra free spins if less than 2 super scatter symbols are active.

Rat mode (extremely high volatility)
You are welcome with 3 respins, so activating coin wagons or super scatter symbols will reset the respins back to 3.

Once you have chosen one of these two initial configurations, the bonus game will begin. With each new spin, the top reel will show different power-ups, and these are activated by landing a scatter or super scatter symbol under the power-up except the mouse. Super scatter symbols have a multiplier that affects all boosters activated by this type of symbol, and you can activate a booster multiple times during the same spin by landing multiple scatters on the same reel. The different power-ups that can land are Coin Wagons, Multipliers, Bombs, Super Scatters, Bag, Chest, Rat or Dwarf.

Coin Wagons = This will be able to land with values ​​of 1X, 5X, 10X, 15X, 25X, 50X or 100X. Once activated, its value will be added to the closest collectors and thus the total winnings will be updated. It will also update the total value on the scatter.

Multipliers = This will be able to land with values ​​of 2X, 3X, 4X or 5X. If activated over a super scatter symbol, this scatter’s current value will increase for the remaining bonus game. The multipliers will multiply their current value by the values ​​that have been collected on the boosters activated by the scatters.

Bombs = When a bomb is activated, it will open new locations, where after activation it will drop to the activation scatter and unlock its 8 surrounding locations. It will explode all positions except the side and bottom collectors if you activate it in the middle position. Unlock the locked positions in the coil area and activate the collectors in the lower row and in the side columns.

Stock Exchange = This will collect all the values ​​that have scatters and side collectors on the corresponding row it landed on. It will also update the total winnings with the collected value and then add this value to the scatter that triggered this purse enhancer.

Chest = This will collect all the values ​​that the scatters have in the reel area and also the values ​​of any open collectors who are within a distance of 3 reels, where it also updates the total win.

Dwarf = This will attach to the lowest trigger scatter which can no longer activate power-ups except coin wagons. If this symbol is stuck on a super scatter, it will collect multipliers. It will collect all values ​​from the reel area of ​​the game and values ​​from any open side collector within a distance of 3 reels, where it will also update the total winnings for the current and remaining spins.

Rat = When it lands, it will walk over collectors on the same coil, where it will add all the values ​​it passes to an unopened collector, then open it. If all bins are opened, it will go to the lower bin and this rat symbol can only land on reels 1 and 7.

Super Scatter = When this is activated, it will move to a random position on the active reel area, depending on whether you have mouse or rat mode activated, it will add 2 extra free spins or reset the respins back to 3. This super scatter symbol can only land on reels 2 and 6.

Bottom Collectors = When activated, will collect all values ​​held by scatters or side collectors on the same reels for each spin. It can be activated by bombs or on reels 1 or 7 using the mouse, where its value will be added to the total winnings on each spin when it is active.

Side Collectors = When activated, it can interact with other features like Moneybag, Chest and Dwarf. When idle, it can only interact with the Coin Wagon boosters. It can be activated by bomb and mouse, where each spin will add its value to the total win.

Mouse Mode – Misery Free Spins
This symbol helps to enable more winning combinations by substituting for other symbols, with the exception of the scatter and super scatter symbols. This symbol will always explode before a new collapse or when a win is created, regardless of whether it is included in the payout or not, creating a new collapse.

When this symbol explodes, adjacent symbols except scatter, super scatter, or other bomb symbols will be removed. This also increases the win multiplier by 1X for the next crash that occurs and adjacent barriers will be moved one step away from the bomb.

If you spin the reels and no win is generated, where the number of scatters is less than 3, all scatters will turn into non-wild bomb symbols and explode. This triggers a collapse, moving the barriers and will also increase the win multiplier by 1X for the impending collapse.

You can use the bonus purchase feature if you want to take advantage of the bonus games right away. There you can choose from the following options: