Sequel with GIGA Volatility For Yggdrasil: On the Launch Pad the 90K Yeti Gigablox! 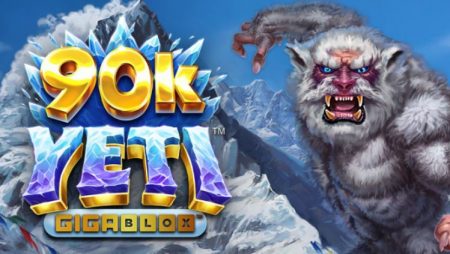 The game’s design consists of a Yeti theme, in which we meet this legendary creature once again in an action-packed gaming adventure. In the background of the reels, you can see the snow-capped mountains of the Himalayas and to the left of the reels stands this muscular Yeti observing the turns that take place. During the rides, suitable music is played which is shrouded in great mystery and icy sound effects.

The game’s wild symbol helps create more winning combinations by substituting other symbols on the reels. The only symbol it does not replace is the scatter symbol.

With every spin you make, at least 1 Gigablox will land on the reels. This giant symbol can be 2X2, 3X3, 4X4, 5X5 or 6X6 in size. When it lands, it will show one type of symbol and if, for example, a 3X3 Gigablox rope symbol lands, it will result in 9 rope symbols.

When you spin the reels in the base game, the Yeti Reveal feature can be activated randomly. Then the Yeti will remove the snow blocks from the reels, where new payout symbols will appear to allow for winnings.

The Yeti will randomly trigger the Snowstorm feature, where the symbols are shuffled on the reels and create a win.

The Yeti will randomly place a Gigablox on reels that are any of the size 4X4, 5X5 or 6X6.

When you spin the reels and get 5 or more scatter symbols, the Free Spins feature is activated. You will then be greeted with the same number of free spins as you had the number of scatter symbols when activating this bonus. Every time you get a scatter symbol, you get 1 extra spin and within this feature there will be no snow blocks on the reels.

You are also guaranteed to activate at least 1 Snowstorm or Giga Summon function during these spins.

If you want to take advantage of the bonus function directly, you can use the Buy Bonus function where the RTP increases to 96.50%. You can then choose from 4 different options that cost and provide the following: