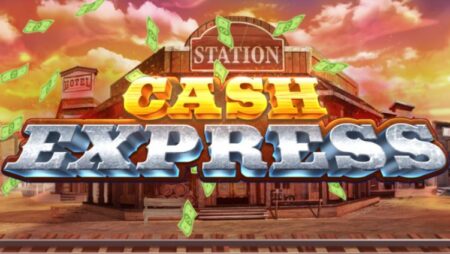 The lowest paying symbols are J, Q, K and A. 5 of a kind with one of these paying twice the bet. Four different cowboys make up the highest paid symbols in the colors blue, green, orange and red. A full line of 5 with one of these pays 8x-20x the bet. The wild symbol in the game is a golden sheriff badge, which substitutes for all other symbols except trains. Cash Express also features train symbols, which are used to increase the next bonus you will receive and also to activate it.

The golden sheriff’s badge is a wild symbol, which works like a wild card, replacing all other symbols except trains.

The train symbol is basically the key to this game. Collecting them will unlock the cash bonus enhancers. If you roll 6 or more in a single spin, the cash bonus will be activated.

Cash bonus enhancers increase the bonus potential. There are 4 different stages in which you progress through the basic game by collecting the train symbols. For each stage completed, you will climb the ladder and one of the cowboys will be featured in the next bonus, bringing different characteristics with him.

You can choose to activate the Super Stake for 1.4 times the original stake. By doing this, you increase the chances of getting the bonus.

The cash bonus is activated by landing 6 or more train symbols. You will start with 3 free spins. Once the train symbols or bonus boosters land on the reels, they will drop to the lowest available space on that reel. These symbols will remain until you have a full row of 5 symbols, from where they will be removed (just like in Tetris) and you will be assigned the total multipliers associated with them. When this happens, the spins will also reset to 3. As mentioned, the bonus enhancer symbols provide some functionality:

Blue (1st): reveals a multiplier value between 2x and 30x the bet.

Orange (3rd): Reveals a multiplier value between 2x and 50x the bet. Adds an extra row to the grid.

If you want to enter the bonus game directly, you can do so by purchasing it for 100 times your bet. The amount of bonus boosters you receive is random.