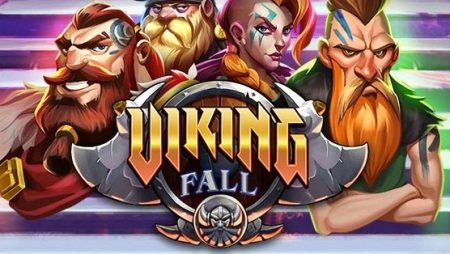 We are returning to the Viking era once again with Viking Fall thanks to a supplier who has achieved excellent results in the past with Vikings Unleashed Megaways or Blueprint Gaming!

Blueprint Gaming and Megaways are somewhat synonymous with each other, but they recently decided to move away from this mechanic in favor of other ideas. This time around, they seem to have taken note of Elk Studios’ popular slots

Will this change work for those who are so used to Blueprint Gaming Megaways titles? and how does it compare with others like it? Let’s find out.

Viking Fall adopts a very cartoonish aesthetic like Vikings Unleashed Megaways previously did, but the graphics look much cleaner in comparison.

The betting options in Blueprint Gaming slots never seem to reach astronomical heights compared to others that offer € 100 per spin, but there is a decent enough variety.

The lowest bet option here is € 0.20 per spin, and the highest option is € 10 per spin. There is a pretty decent selection between the minimum and maximum, so people should all be satisfied.

In terms of symbols, the highest paying symbol in the game is the Viking with the red background, followed by the Vikings with the blue, purple and green background. The average payment symbols are the helmet, the ax, the daggers and the hammer. Low-cost symbols are Viking runes symbols.

There is also a wild symbol represented by a gold coin. Replaces all symbols except the Scatter symbol.

To get a win you will need at least 3 symbols to be linked from left to right on adjacent reels, starting with the leftmost reel. Winning symbols are removed from the game which causes new symbols to be placed which can create even more winning combinations.

The Colossal Mystery Symbol can appear at any time.

This symbol will reveal a random symbol for a guaranteed win. These symbols cannot reveal Scatter or Wild symbols.

Viking Fall Free Spins are awarded when at least 3 Scatter symbols are anywhere in the line of sight. 6 free spins are awarded, with an additional 2 spins for each subsequent scatter up to a maximum of 12 free spins.

During Free Falls there are a minimum of mechanical ways to create a winning combination. Each successful fall increases the maximum routes by one level, which means that each new round starts with at least the minimum routes active. If you are lucky enough, each new spin can start in 262,144 ways once the safe level is reached.

In Free Falls there is also an unlimited multiplier that does not reset between spins.

Those from outside of the UK can use a bonus purchase feature for 100 times your wager.

There is no super buy option here that we’ve seen in some Elk slots, so you’ll just have to hope for more scatters!