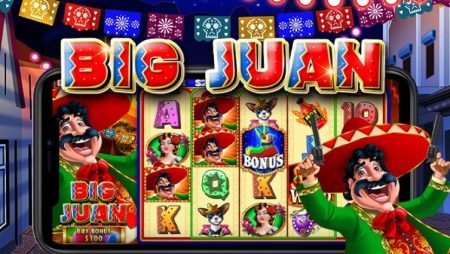 The design of the game is a mexican  theme, where we meet Big Juan who lets us enjoy a lively slot. In the background of the reels, we can see the street we are on and on the left is Big Juan with a wide smile. During the spins, energetic Mexican music is played which certainly fits this theme well. You can play Big Juan on all the device’s notepads, mobiles and desktops. You create a winning combination by landing 3 or more of the same symbol types on adjacent reels starting at the far left.

The lower paying symbols are suits which have been given a Mexican touch and show 10, J, Q, K and A. Landing 5 of the same symbol type pays 1X the bet. The higher paying symbols are a guitar, a bottle of hot sauce, a chihuahua, a woman with roses and Big Juan himself. If you land 5 of the same symbol types, it pays between 2.5X to 6.25X the bet. The game’s wild symbol is a red chili that pays 12.5X if you land 5 of it and the symbol showing a colorful pinata is the scatter symbol. Once inside the Respin feature, you will be able to land a wide variety of symbols including a bag of coins, money symbols, extra spin, boost and jackpots. Let’s find out what the features do.

What is the max win in the slot Big Juan?

What features are available in the slot Big Juan?

The game’s wild symbol helps to create more winning combinations by substituting for other symbols, except for the scatter symbol. It can land on all reels and depending on whether you land 3, 4 or 5, it pays 1.25X, 3.75X and 12.5X the bet respectively. This symbol cannot land within the Respin feature.

If you land 6 or more of the same symbol types on the reels 2, 3 or 4, the Wild Switch feature is activated. Then these symbols will turn into wild symbols, making it possible to create big winning combinations.

If you land 3 or more scatter symbols, the Respins feature is activated. Depending on whether you landed 3, 4 or 5 scatter symbols will result in you getting 10, 12 or 15 respins respectively.

Within this feature, you will be moved to a spot that has a 3X3 reel setup and a special position to the right of it. In the middle of these reels, a Bag of Coins symbol is placed and during the respins, other symbols will be able to land on the other positions. During the spins, a win symbol or boost symbol can land in the special position, where they do the following:

Boost Symbol = When this lands, all money symbols that have landed will be added to the bag of coins in the middle of the reels, where this value will stay during the remaining spins.

On the 3X3 reels, you can land money symbols, extra spin symbols, Mini, Minor, Major and Grand Jackpots. They do the following:

Bag of Coins Symbol = This will be able to grow during the game with the help of the Boost symbol and when the win symbol lands, the total value from this symbol will be collected.

Money Symbol = When these land, they have a random value from a predefined set based on your bet size.

Extra Spin Symbol = This gives 1 extra spin when you win it by landing the win symbol at the same time.

Jackpots = There are four different Jackpots, Mini, Minor, Major and Grand, that can land on the reels. When you land a Win symbol along with these, they will be added to their respective meters displayed to the left of the reels.

During the Respin feature, you can manage to take part in any of the 4 Jackpots available. By filling up the correct amount on the different jackpots, you will receive their respective instant prize. The different Jackpots are and give the following:

Mini Jackpot = By collecting 3 Mini symbols, you get 12.5X the bet.

Minor Jackpot = By collecting 4 Minor symbols, you get 50X the bet.

Major Jackpot = By collecting 5 Major symbols, you get 250X the bet.

Grand Jackpot = By collecting 5 Grand symbols, you get 2500X the bet.